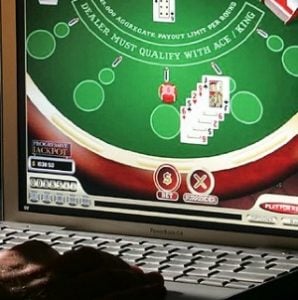 Online gambling has seen significant traffic and profit increase across the United States over the past year. However, the latest bombshell by the Office of Legal Counsel may have put a stop to the party.  This is because earlier this month, they sent out a new interpretation of the Wire Act.  Thus, the new interpretation is making online gambling illegal across state line illegal in all of its forms. The Gambling Industry’s Reaction to the Wire Act Reinterpretation has been one of confusion with many questions without answers.

Some states that already have an online gambling exemption with other states may be hit the hardest.  They include Delaware, Nevada and New Jersey who allow their residents to play online poker together. However, at the moment most states do not have any major worries about cross-state online gambling.  New Jersey which saw a record breaking $29 millions in online gambling revenue last December is such an example.

This is because 80% of its online gamblers are within 10 miles of its borders. Furthermore, most of their out-of-state gambling customers reside in neighboring states like New York and Pennsylvania. Thus, it is an easy hop across the state line for them.  The main issue for New Jersey will be when New York and Pennsylvania legalize online gambling.

Not a Big Deal for most states but several questions remain

In most cases, the states that have just begun their online infrastructure will not suffer any loss. However, one of the main questions is about payment methods across state line.  This is because large gambling operations like DraftKings and Caesars Entertainment depend on banking methods that could cross state lines. Thus, this could become a problem in the future depending on how strict the DOJ adheres to this new interpretation.

The Gambling provider industry is also worrying about the impact it could have on their business to a lesser degree. Pay Per Head Sportsbook providers for example have not seen any decline in new customers. However, they are watching the situation closely for any shift in the industry.