The sportsbook pay per head industry had its humble beginning back in the late 1990s as an industry of its own even though its origins began as an agent software for sportsbook in the mid 1990s. Even though many companies claim that they invented the pay per head sportsbook, we do know that in the past few years, this industry has been on the rise. 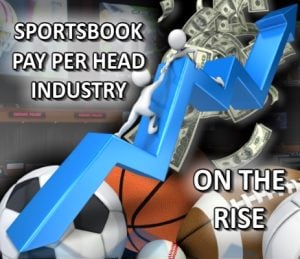 In fact, in the past few years, 93% of all new sportsbooks around the world start out using a bookie pay per head service because it allows bookies to start their own betting operation at a fraction of the cost of starting a sportsbook from the ground up.

The number of sportsbook pay per head companies has also increased showing an average growth of 12.5% every year. In addition, 80% of gambling and sports betting software providers have added a bookie pay per head option to their list of services.

PricePerPlayer.com, a sports betting software company that also offers a bookie pay per head service, says that many traditional bookies are not starting to see the advantage of using a pay per head service. Such services not only allows them to offer more betting options to their players but also allows their players to place more bets because of its online capabilities and mobile platforms.

This is where a bookie pay per head service comes in as it allows bookies to start their own sports betting operation without having to hire a large staff and purchase a sportsbook software which runs well over a quarter of a million dollars.

Many gambling experts and analyst agree that this trend will continue to increase for at least 3 more years and being to plateau as the market becomes saturated with new online sportsbooks.