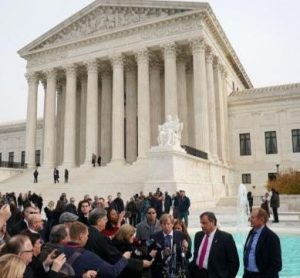 In a victory for sports bettors, the U.S. Supreme Courts voted to strike down the federal sports betting ban. This ruling by the Supreme Court Rules that states can Legalize Sports Betting, thus breaking the Nevada monopoly. In addition, the ruling of this landmark case has made every sports bettor in the U.S. thankful to New Jersey.

The state of New Jersey has been trying for 7 years to essentially legalize sports betting.  This was done by arguing that the “1992 Professional and Amateur Sports Protection Act” was illegal. This is because it argued to the Supreme Court that it violated the right of the states.

On the other hand, professional and college leagues have been fighting to keep the ban in effect during those seven years.  In the end, the Supreme Court struck down the entire federal law in a 6-3 vote.

The Supreme Court Justices agreed that New Jersey was in the right.  Thus, they upheld the 2014 New Jersey Gambling Law. This law made sports betting legal in casinos and racetrack thus voided the federal Professional and Amateur Sports Protection Act.

According to Justice Samuel Alito who was in favor of striking down PASPA, “the choice is not ours to make”.  In

addition, he said that “The legalization of sports gambling requires an important policy choice”.  This is because each state must make its own decision.

In conclusion, Justice Alito said that “Congress can regulate sports gambling directly, but if it elects not to do so, each state is free to act on its own”.

Since the sports betting issue has been settled, sports betting software companies and gambling operators are on the move.  In addition, shareholders and investors are also acting on this ruling by buying casino stocks.

In fact, stocks of several casino companies moved went up in price after the ruling.  These include, Caesars Entertainment, Penn National Gaming, up 4 percent, MGM Resorts, Boyd Gaming and Churchill Downs.

Furthermore, PricePerPlayer.com has also seen an increase in gambling operators wanting to use their Sportsbook Pay Per Head Service. Today so far, the number of Bookie PPH form application received has gone up 150% compared to last year.