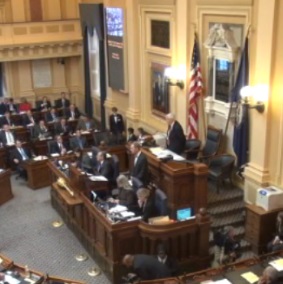 The Virginia General Assembly will soon be in session and lobbyists are working to be heard during the assembly. Furthermore, Gambling Companies are Lobbying for Sports Betting in Virginia according to several sports betting industry sites. Even though their individual goals vary and in some cases unclear, it is evident that the wheels are in motion.

Thus, in the past weeks, gambling companies have hired over a dozen lobbyists to represent them in the upcoming session. Some of these companies include MGM Grand, Caesars Entertainment, slot machine manufacturers and sportsbook software companies.

Ever since the Supreme Court ruling ended the federal ban on sports betting, several states have worked on expanding gambling. So far, four states have legalized sports betting and 15 other states tried but failed to legalize it.

As mentioned earlier, the cause for this lobbying spree by gambling companies varies differently depending on the company.  For example, casino companies like MGM and Caesars are lobbying to protect their existing interest in neighboring states. However, it is clear that they still support sports betting but want to ensure their foot is in the door.

Thus, by lobbying the Virginia General Assembly they will have more control over gambling in Virginia and other neighboring states. However, most of the casino companies have been vague or unavailable about their intentions.

One example is the statement by MGM’s executive vice president for global communications, Alan Feldman.  For example, MGM said that the company “looks forward to working with policy makers as the commonwealth considers gaming-related matters.”

Furthermore, several other companies have just declined to comment on their intentions.  These include Caesars, Pace-O-Matic and Castle Hill Gaming.

Lawmakers in Virginia have usually been in opposition to gambling expansions.  However, they have loosened their policy this year when they allowed Colonial Downs to install gaming machines around the state.